Coronary artery disease (CAD) is also sometimes referred to as coronary heart disease, ischemic heart disease or atherosclerotic cardiovascular disease. Often, when people refer to the general term “heart disease,” they are talking about CAD as it is the most common type of heart disease. CAD is the leading cause of death in the United States in both men and women. However, we also now have better and better ways through lifestyle changes, medications and sometimes interventional procedures that can allow people with CAD be able to live with minimal or no symptoms and, most importantly, a lower risk of having or dying from a heart attack. CAD cannot be cured but often it can be very effectively treated.

CAD is a condition in which plaque, which is made up of fat, cholesterol, calcium and other substances in the blood, builds up inside the coronary arteries which supply oxygen-rich blood to the heart muscle.  This plaque build-up is called atherosclerosis. Plaque can grow large enough to reduce blood flow through an artery. The chest pains of angina occur when the heart cannot get enough oxygen-rich blood through plaque-clogged arteries although blockages do not always lead to symptoms (“silent ischemia”). While atherosclerosis occurs over many years, life-threatening damage to heart muscle supplied by arteries with plaque can occur in minutes, sometimes with no prior warning.  A piece of plaque can break off at any time and totally block a narrowed artery, causing a heart attack.

Arteries are essentially tubes or pipes and the inner, central and open part of the artery is referred to as a lumen.  Arteries that feed blood to the heart are referred to as coronary arteries. At a certain point (usually when the blockage is at least 60 to 70% of the circular lumen area of a coronary artery) the heart muscle can’t get adequate blood or oxygen that it needs, especially when it has to work harder such as during exercise. This can lead to symptoms such as chest pain (angina), or when severe enough, a heart attack, where permanent heart damage occurs.

While plaque can gradually grow large enough to completely block blood flow through an artery, more frequently, a plaque may suddenly break or rupture, causing a blood clot to form (from blood cells called platelets clumping at the site of rupture to, ironically, repair the artery) that blocks a coronary artery.  Most heart attacks occur when this blood clot suddently cuts off part of the heart’s blood supply.  How much heart muscle damage occurs depends on if the body can open up the blockage or get rid of the clot and how much heart muscle is supplied by the coronary artery that is blocked.  A heart attack can result in sudden cardiac death (SCD) due to sudden life-threatening arrhythmias caused by dying heart muscle cells. While heart attacks occur more commonly in older individuals, tragically, they can occur in relatively young people in their 40′s and 50′s even with no prior warning signs.  This is why it is important to assess and recognize the risk of CAD based on risk-factors such as hypercholesterolemia, hypertension, family history of CAD, smoking and diabetes.  Often, being able to look at the health of one’s arteries can be life-saving such as with carotid IMT testing. 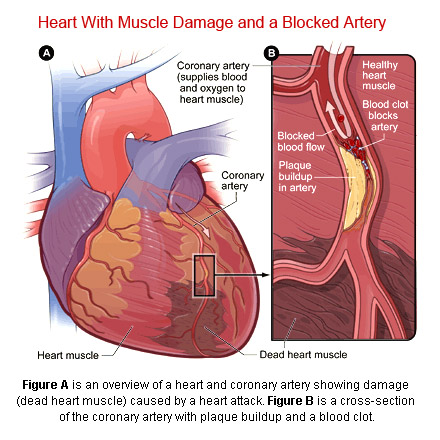 To start, a physician needs to get a history from a patient and perform a physical exam but often specfic testing helps establish or confirm the diagnosis or is useful in following or determining the best treatment for a patient with a known diagnosis of CAD. Several of the routine tests that are used nowadays include the following:

While healthy lifestyle changes are the foundation of treating CAD, regular medical checkups to make sure the disease is stable and medications are appropriate and optimized, is critically important. In addition, some of the main risk factors for CAD — high cholesterol, high blood pressure and diabetes — have no symptoms in the early stages. Early detection and treatment can set the stage for a lifetime of optimal heart health.

The same lifestyle habits that can help treat coronary artery disease can also help prevent it from developing in the first place. Leading a healthy lifestyle can help keep your arteries open and clear of plaque. Primary prevention is the term used to avoid CAD in those with no history of it and secondary prevention is when someone has known CAD in whom we are trying to prevent its complications such as angina and heart attack.

Whether for primary or secondary prevention, to improve your heart health you can: