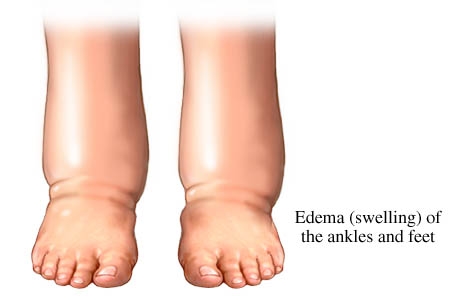 Edema is the medical term for swelling caused by a buildup of fluid in your body’s tissues. It can refer to enlargement of organs, skin, or other body parts due to an abnormal accumulation of fluid. The extra fluid can lead to a rapid increase in body weight over a short period of time (days to weeks). Sometimes people can retain fluid with several pounds of weight gain prior to any swelling being obvious.

The most common type of edema is peripheral edema, when one’s feet, ankles and/or legs are swollen. The causes can be due to several different medical conditions, some very serious and due to systemic diseases (including heart failure), others not serious at all or due to local conditions in the legs but still bothersome to the person. Sometimes, edema is multifactorial and due to several different factors. Since it can be due to heart or vascular problems, patients with edema are often evaluated by a cardiologist.

Leg edema can be due to the veins in the legs not draining blood adequately such as can be due to varicose veins or venous insufficiency. Edema in the legs can be due to abnormal removal of fluid in the tissues of the legs by the lymphatic system (lymphedema) and in rare instances can be due to a pelvic or upper leg tumor blocking a blood vessel or lymph flow. Edema due to leg vein or lymphatic problems tends to occur more if people stand or sit for long periods of time (dependent edema) due to the simple effects of gravity promoting fluid build up down below in the legs. Things such as hot weather, pregnancy or long plane trips can lead to some degree of edema, especially in those prone to it with venous or lymphatic drainage issues. Mild leg edema is common during pregnancy due to a physiological increase in blood volume and pressure from the growing womb.

When swelling occurs in just one leg, it might be due to a blood clot in the veins of the leg (deep venous thrombosis or DVT), especially if it is accompanied by pain, redness and/or warmth. These blood clots can be life threatening if they break off and travel through the heart to the lungs (pulmonary embolism) and have to be treated with blood thinners.

Arthritis in the knee or ankles can cause edema as can traumatic injuries to the legs. Low protein levels in the blood, whether from malnutrition, liver failure or loss or protein due to kidney dysfunction (proteinuria), can lead to edema.

If one’s thyroid is significantly underactive (severe hypothyroidism), a different type of edema known as myxedema can develop which is actually due to deposition of components of connective tissue under the skin rather than fluid.

Some medications can cause edema in the legs (although usually do not) such as blood pressure medications known as calcium channel blockers, especially in the dihydropyridine subclass such as Norvasc (amlodipine) or Procardia (nifedipine) although this is usually a localized phenomenon and not necessarily dangerous. Non-steroidal anti-inflammatory drugs (NSAID’s including ibuprofen and naproxen) can cause fluid retention due to potential effects on blood pressure, the heart and / or kidneys, leading to edema. Diabetic medications such as Actos (pioglitazone) can cause edema or heart failure and steroids can lead to edema.

Increased sodium (salt) intake can lead to general fluid retention, even in otherwise healthy people, causing edema of the legs although those with congestive heart failure or kidney dysfunction (renal insufficiency or renal failure) are particularly susceptible.

Heart failure, liver or kidney disease (which can also lead to fluid retention and edema of the legs), arguably, are the most serious conditions that have to be considered when a patient has edema in the legs. Severe kidney and liver disease can sometimes lead to whole-body edema (anasarca).

Edema due to Heart Failure

When the left side of the heart is not working properly (whether due to abnormal function of the heart muscle or heart valves), backward pressure can build up into the lungs causing shortness of breath. The back up of pressure congests the lungs which is why heart failure is often referred to as congestive heart failure (CHF). When the back up of pressure is significant, fluid can spill into the air pockets of the lungs, a condition known as cardiogenic pulmonary edema and can lead to respiratory failure.

In heart failure, over time, the pressure transmits through the lungs and into the right side of the heart. This can lead to a build-up of fluid in the body in general that leads to peripheral edema or swollen legs. Edema due to heart failure or kidney failure or even fluid retention in general usually causes pitting edema where after pressure is applied to a small area in the swollen part of the leg, the indentation persists for a while after the release of the pressure.

In more chronic cases of heart failure, edema can also occur in the intestines, liver, spleen and can cause build-up of the abdomen in general (ascites). Less commonly, leg edema can also occur from right-sided heart valve problems, or severe lung disease (including emphysema or COPD). The latter, when severe, can put significant pressure on the right side of the heart leading to edema of the legs.

Ultimately, the most effective treatment for edema is treating the underlying cause especially when cause by a systemic disease. Swelling in the feet or ankles from whatever cause may be reduced by having the patient lie down in bed or sit with the feet propped up on cushions to counteract the effects of gravity. Leg compression or support stockings can sometimes help reduce or prevent edema but are notoriously challenging to use regularly. Often diuretics (water pills) are necessary, especially when edema is due to heart failure or kidney failure. Avoidance of sodium in the diet, avoidance of NSAID’s and avoidance of other triggers is important to keep edema in check.